Quietly silent, the calcified beads were wrapped in a coat called the years, which made her show an elegant and quiet posture, covered with a mysterious and beautiful veil, beautifully in place, making people I donâ€™t want to let it go.

This is the West Asia agate bead around 2000 BC. Now the price is already very high. The gray, calcified, and windy patterns of the old beads are the vicissitudes of the years, the two rivers 4000 years ago. The agate beads in the basin have already jumped into our eyes.

Agate is a kind of chalcedony mineral, often a strip-like block mixed with opal and cryptocrystalline quartz. The hardness is 7-7.5 degrees, the specific gravity is 2.65, and the color is quite layered. It is translucent or opaque and is often used as a decoration or play. 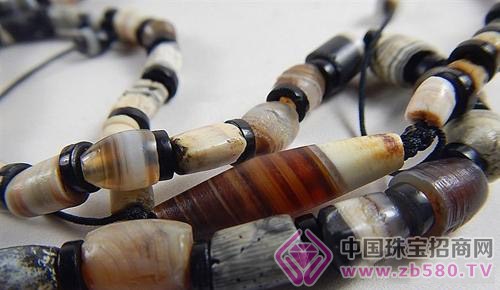 Several keys to the identification of old agate:

1. The most common material for counterfeiting old agate is glass. If you look carefully, there will be a small amount of bubbles in the glass.

2, the old agate color is brighter, the surface gloss is better, and the real old agate due to the oxidation of the air, the color will be somewhat bleak, similar to the effect of matt.

3, the counterfeit fake agate texture is soft, jade can be used to mark on the fake agate, but the real agate will not.

4, the real agate is warm in winter and cool in summer, while the synthetic agate changes with the outside temperature, it also becomes hot in the heat of the day, and it cools in the cold.

5, the real agate can see the band or silky "cloud", the transparency is a little worse than the synthetic agate, and the fake agate is more transparent like a glass ball.

The feathers were nailed on by hand in order to give a sense of depth.Afther that,the designs look more fashion and stereoscopic.

The products is in soft handfeeling and suitable for children dress.evening party dress .garment dress etc which are shipped to American.European and Turkey etc.It's really popular in the market.