In history, there are such treasures. Those who have had them have been in a doom, have gone through catastrophe, and finally escaped similar tragedies. These treasures are like being cursed, manipulating the fate of their masters. Closer to us is the former deputy director of the National Development and Reform Commission and the former director of the National Energy Administration, Liu Tienan, who was "double-opened." According to the media, Liu Tienan was found to have 19 bank accounts with a deposit of 19 million Australian dollars, more than 9 kilograms of gold bars and 25 rare diamonds. Today, Liu Tienan is dismounting. Where are these 25 rare diamonds going? Liu Tie-nan will dismount, will the next owner of the 25 diamonds encounter bad luck? Let's take a look at the weird curse behind the rare treasures and learn about the legendary stories. The editor of the Jewelry Alumni Association does not talk about politics. Let's talk about the stories behind these treasures!

Seeing this "hope" diamond, would you think of the "heart of the ocean" worn by Rose in the "Titanic" drama? Many people think that "hope" is the prototype of "the heart of the ocean." This is not the case. The real "Hope" is a diamond with a legendary "curse" story. The best home of this unrecognizable blue diamond is the Smithsonian Institute in the United States. When you hear this name, you may feel that it means good luck and bring infinite hope and good luck. In fact, it brought bad luck and even death to the owner in three centuries. 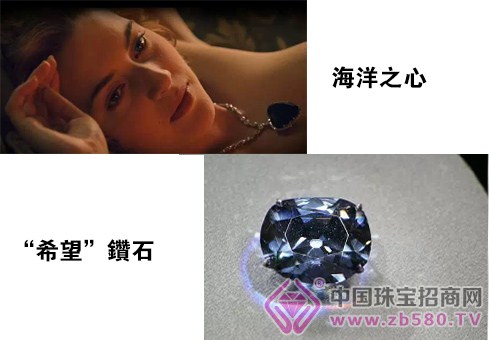 The "hope" diamond weighs 45.52 carats and has an extremely rare dark blue color. It is full of strange and tragic experiences in its history like a fog, always bringing irresistible luck to its owners.

In 1642, the French explorer and jeweler Tavimir first got this huge diamond in the southwest of India, with a mass of 112 carats. Tavimir dedicated the diamond to King Louis XIV of France. The king sealed him an official position and rewarded him with a large sum of money. The smuggling of the ship also followed, and the property of Tavimir was spent by his unfilial son, making him poor at the age of 80. In this way, he had to go to India again to seek new wealth. However, this time it was killed by wild dogs there.

The French King Louis XIV ordered the blue diamond to be honed, and the quality was reduced to 69.03 carats, but he only wore it once and suffered from smallpox.

The successor to Louis XV became the new owner of the diamond. He vowed not to wear this dark blue big diamond and lend it to his mistress, and the mistress was cut off in the French Revolution.

This blue big diamond was passed to Louis XVI. His queen often wore this drill and both were sent to the guillotine.

Princess Lanbena, the daughter of Queen Louis XVI, became the owner of this blue diamond. She probably also was killed in the French Revolution because she wore this unfortunate diamond.

The blue diamond was stolen in the French treasury in 1792 and was re-cut once, the quality was reduced to 45.52 carats. It appeared in the London jewelry market in 1830 and was immediately adopted by the banker Hope. Buy it, worth Â£18,000. Since then, this blue diamond is called "Hope." Because English Hope is the meaning of hope, it is also known as "hope." Banker Hope passed the blue diamond to his grandson. The new diamond owner later married an American actress Josie. Soon, Little Hope went bankrupt and Josie divorced him. Josie died in Boston in the United States in 1940. He was destitute in his later years and often complained that "hopefully" diamonds gave her a hard-to-get rid of her luck. In 1906, Little Hope was forced to sell "hope" to pay off debts. In the following two years, "Hope" was resold several times.

In 1908, "Hope" was bought by Turkish Sultan Hamid II for $400,000. It is said that when the businessman who handled the sale went out with his wife and children, the car turned over the cliff and the whole family was killed. "Hope" was worn by Zuo Bi De, a confidant who was rewarded to him by the Sultan in the Turkish court. Soon, Zuo Bied was executed by the Sultan.

In 1911, McLaren, the head of the postal service in Washington, USA, bought "Hope" for $114,000, and he gave it to his wife, Mrs. McLaren, as a gift. Someone told Mrs. McLaren that this is a diamond that will bring bad luck. Mrs. McLaren laughed. In the second year of her â€œHopeâ€, her son was killed in a car accident, and her husband, Mr. McLean, drunk into madness and soon died in a madhouse. Her daughter was over 25 years old because of excessive sleeping pills. Xiaoyu. Mrs. McLean died in 1947, and then the famous American jeweler Winston bought all her jewelry and became the new owner of "Hope". With this lucky diamond, Winston flew across the Atlantic in different seasons and was safe. Many years have passed, and Winstonâ€™s family has a prosperous career. Later, Winston donated it as a gift to the country, now in the Smithsonian Museum in Washington, USA. When everyone thought that superstition was finally shattered and the luck was over, the Harry Winston jewelry store was frequently robbed. In 2008, the biggest jewel in French history occurred at the Harry Winston Paris branch. except? Today, the "hope" diamond is placed at the Smithsonian Institute in the United States, which may be its best destination.

In the Jewelry Science Education Base of the Jewelry, Jade and Precious Metals Testing Center of Guangdong Province, there is a 1:1 imitation of "Hope" Diamond, which is free to the public!

Black Olof - the curse of jumping from the building?

The British Museum of Natural History hides a number of â€œtreasuresâ€ and the â€œThe Eye of Brahmaâ€ is one of them. This black diamond is also known as "Black Olof" and weighs 67.5 carats. This black diamond is said to be the eye of the Hindu goddess Brahma (the god of creation) in India's Pondicherry, hence the name Eye of the founder (TheEyeofBrahma). The black Oloff originally weighed 195 carats and was later taken out by a greedy monk. The curse is that all owners will commit suicide by jumping off the building. The three men who had the eyes of the founders were the 18th century Russian Princess Nadia Vyegin-Orlov and Leonila Galitzine-Bariatinsky, both of whom committed suicide in 1947; imported it into the United States. New York jeweler Paris, also jumped to the building and committed suicide shortly after the black diamond sold. 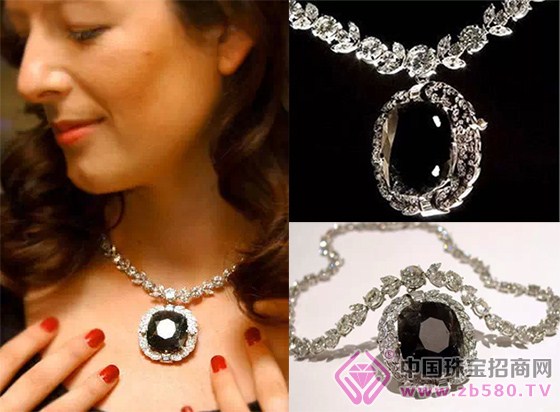 Eye of the founder

Such a legendary "evil death gem" makes people respect it. In order to get rid of the legendary curse, the black diamond was cut into three pieces, some of which were collected in the British Museum of Natural History and the rest were held by private collectors. Until 1990, one of the three pieces was re-visited at the New York auction, and now the holder of the black diamond is Mesas.

The holder of the Eye of the Creator is Mesas

Mesas once said, "In the mid-20th century, the media called it an 'evil death gem', but I never felt that there was any tension in having 'Black Olof'. I am confident that the curse has been broken. â€

Remember the crown of pearls worn by Princess Diana on many occasions? Because the pearl inlaid on the crown is like a teardrop, it is named "Pearl Tears." The crown is cleverly designed and the top is free to be dismantled. It was originally made by the Greek king Otto commissioned jeweler Gerard Garrard for his wife, Amalia. Shortly after the King Otto sent the crown, he was diagnosed as severe. Mental illness. 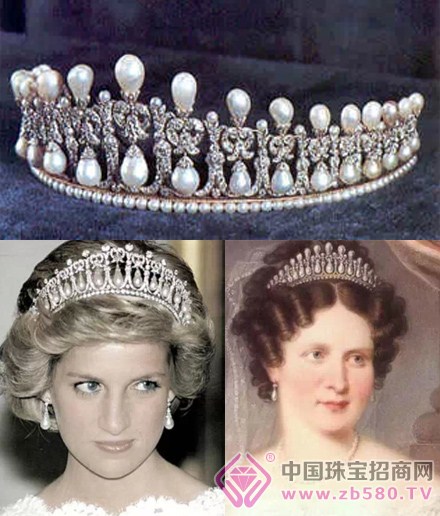 Later, the crown was passed to the Queen of Bavaria, Teresa, and passed to Princess Mary Gabriel. Anyone who got this crown, the emotional life has been catastrophic, and people are embarrassed. The former owner of the "Pearl of Tears" crown, the Duchess of Cambridge, was not recognized by the royal family for life, and was only chased as the Duchess of Cambridge. The marriage between Diana and Charles has been filled with pain and tears from the beginning. The "rose in the wind" is finally suffering, and it is fragrant.

In 1701, a slave dug a 410-carat diamond from the Partil mine â€“ the largest diamond ever discovered. The slave decided to take this rare treasure into his own possession and secretly took the diamond out of the mining area. He met a British captain and was willing to split the price of the diamond with the captain and asked him to take it away. However, the captain arranged an "accident" - the slave fell off the boat and died in the sea, the captain naturally swallowed the diamond. The captain committed suicide shortly after selling the diamond.

Later, this expensive diamond was bought by the French royal family and named the Regent King Diamond. On March 21, 1721, this "Regent King" first appeared in the public in France - Louis XV wore it when he met the Turkish ambassador. Before this, Westerners have never seen such a huge diamond.

Regent King Diamond in the Louvre

In 1799, Napoleon professed himself as the first consul, and he set this diamond in his sword guard to fight with him. I don't know if it is the fate of the people, or the power of the curse, the Battle of Waterloo, Napoleon was defeated. After Napoleonâ€™s last exile, it was placed in the Louvre for public visits because of the value of the â€œRegent Kingâ€ and its extremely important historical significance. It was not until the German aggressor approached in 1940 that it had never left. In order to protect it from being snatched by the Nazis, people secretly transported it out of the Louvre and hid it in the castle of Earl of Chambord until the end of the war.

Nowadays, the "Regent King" drill once again appeared in the Louvre, lying in the display box in a frosty manner, emitting a dazzling and charming light. (Excerpt from "The Legend of Diamonds" [United States] Leo P. Kendal / Luo Chenzi / translated by Peking University Press)

The Mountain of Light Diamonds - the root of the monarch's doom?

The "Mountain of Light" diamond is said to be a gift from God to a faithful believer. There is a passage in the Qur'an: "Whoever owns it, whoever owns the whole world; whoever owns it will have to bear the catastrophe brought about by it. Only God or a woman who owns it will not suffer any punishment. "It's here, referring to the famous "Bright Mountain" diamond. 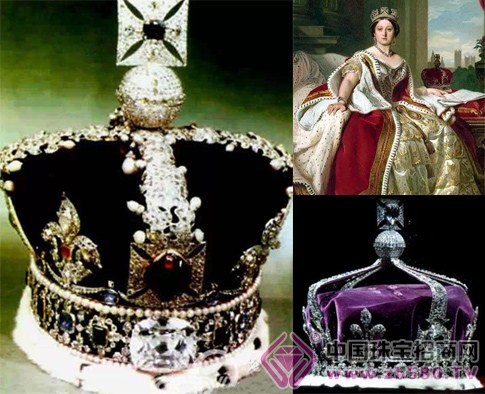 Queen Elizabeth wears the crown of the mountain of light

This diamond has the oldest recorded history dating back to 1304. The original stone is said to weigh up to 800 carats, but after being first polished to a rose type, it weighs only 191 carats. In the 16th century, the founder of the Mughal dynasty in India became the first monarch to have a mountain of light. After he got the mountain of light, he hid it in the peacock throne that symbolizes power and announced to the world that he had received an invaluable treasure. However, shortly after getting the mountain of light, Bae's son launched a coup, put Baer into the cage, and boarded the Peacock throne. Babel became the first king to suffer bad luck after receiving the Mountain of Light.

Subsequently, the 5th generation emperor Shah Jahan, who was famous for building the Taj Mahal, became the new owner of the Mountain of Light. Shah Jahanâ€™s dozen sons were ruthless in order to compete for the throne and this expensive diamond. The winning son forced Shah Jahan to abdicate. Shah Jahan was later placed under house arrest in the Red Fort of the Mughal dynastyâ€™s old capital, Agra. Until the end of the day.