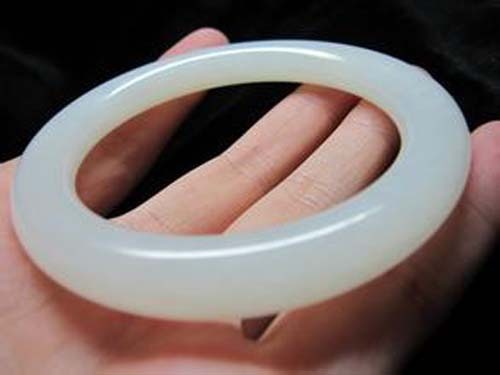 Russian jade, from the initial filling of the domestic market to occupy half of the country now, from the perspective of the current development of the Chinese jade market, the market prospect of Russian jade is increasingly favored by professionals.

As long as the standards are met, they are called Hetian jade.

Many consumers find that at the retail end, they often only see the sale of Hetian jade stores, but it is difficult to see Russian jade signs. Is the business "mixed with fish" and deliberately confusing the origin of jade?

Director of Inspection Department of Heilongjiang Province Gold and Silver Jewellery & Jade Appraisal Center Fang Damin showed the reporter the â€œNational Standard (GB/T 16552-2010) Name of Jewellery and Jade Stoneâ€, in which the naming principle of â€œnatural jadeâ€ clearly stated â€œwith name of placeâ€. The basic name of natural jade is not based on the meaning of origin."

Therefore, when consumers purchase, if they do not specifically question the place of origin, the merchant is not obliged to inform the sale of Hetian jade in the end is from Xinjiang Hetian, or Russia and other places.

Tong Yu, general manager of Dongyu Trading Co., Ltd. has been engaged in Russian jade trade for many years. He said that in the early 1990s, Russian jade began to enter the Chinese market in the form of trade. Since 2008, the Russian jade trade has gradually become industrialized, and raw materials and processing markets have been formed in Beijing, Henan, Harbin, Manzhouli and Dongning ports.

â€œThe resources of Hetian jade in China have already been exhausted, the output is getting less and less, the price is getting higher and higher, and it is no longer able to meet the needs of the domestic market. Therefore, everyone has turned their attention to Russiaâ€™s rich jade resources.â€ Yu Peng said.

According to industry statistics, Russia's jade resources are rich in reserves, accounting for about 70% of the world, and the origin of Russian jade and Xinjiang Hetian belong to the Kunlun Mountains, both of which are relatively close in quality. Compared with Hetian jade produced in Xinjiang, Qinghai, South Korea, and Canada, Russia's jade currently enjoys certain advantages in terms of quantity, price, and market share.

Buy jade to see the essence, do not be produced "flicker"

Fang Damin said that the thing that made him the most â€œheadacheâ€ now is that someone often holds a piece of jade to let him identify the place of origin.

For some consumers and entry-level collectors who "who blindly listened to the merchant's place of origin and non-Wada field materials," Fang Damin said that such misunderstandings are widespread in many people's minds. â€œNot every piece of jade produced in Xinjiang Hetian is better than elsewhere. Consumers buy jade, not buying places of origin,â€ said Fang Damin.

Experts pointed out that to measure the value of a jade carving work, it is necessary to refer to the comprehensive factors such as the color of the texture, the presence or absence of defects, the degree of scarcity, and the carving process. A single consideration of origin factors not only limits the range of consumer choices, but is also easily fooled by sellers.

The industry believes that in the next few years, Russian jade raw materials still occupy a very important position.

Yunpeng said: "With the reduction of domestic jade resources, Russia's superiority in quantity and quality will become more apparent, and the people are gradually accepting it."

â€œIn the past, Suzhou's technologists still rejected the Russian jade, but now the degree of recognition has also increased.â€ Gusu Bai Yutang, chairman of the jade carving family Huang Zhenghua pointed out: â€œAs long as the material is good, good ideas, good technology, Russia does not lose To Hetian jade.".

Some merchants have analyzed that the prices of Russian raw materials have now risen to a historical high, and the â€œRussian No. 7â€ jade material has reached 13,000 yuan per kilogram. Given the current prices, China's jade raw material suppliers need to be adjusted, and the domestic market's hoarding of jade materials needs to be digested. Therefore, in the short term, the price of Russian jade will be in a relatively stable transitional phase. In the long run, the demand in the Chinese market is still strong, and the prospects of the Russian market will become better and better.